Poul Smidt is a Danish journalist and lawyer born April 1944 in Copenhagen, Denmark

Poul SMIDT has a strong international background both as a journalist and as an adviser on political and media issues related to nation building.. He is presently EU-political adviser to the EU-ambassador in Sarajevo, Bosnia and Herzegovina, based in Brcko District.
Kabul 2008-09 (as Special adviser to the Head of Mission, European Police Mission,EUPOL – and mentor to the spokesperson in Ministry of Interior Semarai Bashary), Iraq 2003 and Kosovo 2000-2003 (as director, press and public information OSCE Mission to Kosovo). Election Observer in Kosovo, Montenegro, Ukraine and Cambodia. 25 years in international journalism focused on EU and international cooperation, see below. 1984-1986 Danish diplomat in Brussels, Spokesperson on EU-matters. 2004-2006 Nordic Representative (lobbyist) for the Nordic Public Service Broadcasters from Iceland, Finland, Norway, Sweden and Denmark.

Commentaries/analysis in Daily newspaper Information mostly on EU-affairs. Produced a series of TV-programmes for dk4 on EU and anchored a monthly TV-program. Jan. 2000-June 2002, Anchor-moderator TV- late news program, News night/ Deadline, DR, National Public Service Channel. From 1980-2000: 3 periods and eleven years as the permanent correspondent for Danish Public Service Radio/TV in Brussels, 2 years as the permanent correspondent in Washington DC – and 2 years as the spokesman at the Danish Permanent Representation in Brussels, Foreign Office and political reporter, Foreign Editor at the Radio News, DR and Chief Editor at the national newspaper Aktuelt.

Excellent English. Can work in French and German as well. Mother tongue Danish. Has written a few books on European Cooperation, Culture and politics and have lectured in European affairs, international relations, democracy and media. IT-skills as a well educated and trained media person.

Trained as a journalist 1965-1968 including High School of Journalism, Aarhus, Denmark, Graduated as a lawyer from University of Copenhagen 1979. Studied law at the same time as he had full time employment as a foreign affairs and political reporter at the national TV-station, DR-monopoly. 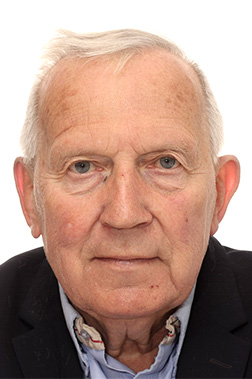